Beex
YOU ARE NOT LOGGED IN!
Alan Wake
doesn't have a topic
Reply

First 15 minutes of Alan Wake.
Quote:
"Remember me? Rumplestiltskin Old Man Person? I'm about to be killed by a contrivance!"
Quote:
"You're a terrible author!"
Indeed.
Quote:
"My wife, Um Bongo, had a phobia. The fear of being ripped apart by contrivances. Unbeknown to her I'd booked a holiday in a contrivance factory."
Quote:
"It's lovely here. Somewhere I could rest and forget about work. Somewhere we could be happy. I was about to be bitterly disappointed"

Quote:
kalmar wrote:
Kafkaesque nightmare innit.
Nah, it's almost directly lifted from The Shining, even going so far to actually say it several times, and Twin Peaks. By "episode" 6 I fully expect Alan Wake to be rampaging through Maine on the back of a Sandworm.

These aren't "homages" or references, they're direct lifts. And written so bloody poorly. So bad.

lasermink
Yeah, I've heard enough that this is a budget price game for me.

It's strange, because I really liked those "prequel trailers" or whatever they were called. They didn't seem to blatantly copy stuff like that.

Dimrill
Oh, and after every chapter it finds an arbitrary reason to relieve you of all weaponry.

Dimrill
And there's a rope suspension bridge bit lifted from Indiana Jones and the Temple of Doom. This game is shameless.

TheAlbin0Kid
I bought it at £19.99 and haven't played it yet. If anything your comments have made me want to play it even more; anything lifted from Twin Peaks is going to suit me just fine.

Dimrill
I insist Kalmar transfer over the discussion we wert having in Bits and Bobs 20 into this here thread. I insist.

shoesonwrong
I didn't buy Alan Wake and added it to my Gamefly queue instead. (Do you guys have a UK version of Gamefly?) It arrived at my house a few days ago and while it's not entirely devoid of entertainment value, I'm really glad I didn't buy it. It's like playing a video game amalgamation of Secret Window, Twin Peaks, and Insomnia. Every other line or action makes me groan under the weight of all the clichés.

The controls feel a bit clunky, too. I think they were trying for intuitive but missed the mark and landed right in befuddling. His running stamina is never explained (I spent a few minutes going, "Is he wheezing? What is going on? Why is his flashlight bobbing all over the place while he runs off the road?") and the dodge maneuver (the same control used to sprint/run) is horrendous. I keep trying to get Alan to dodge incoming axe swings but instead he will sometimes do things like scamper a foot away or lower his head and run right towards the axe-murderer. Good job, Alan.

Having said all that, it's still fun so far, and I'm glad I rented it. Plus, I'm a big 'fraidy cat, so some parts have gotten me good and skeered.

Dimrill
Is Gamefly a postal rental service? If so, yeah there are a few around. Lovefilm being the first that pops into my lobes.

Agree wholeheartedly about the cliches. I'd actually managed to forget about Secret Window but by the jumping Jeebers it's a good parallelelellellelllll. I can't say I've found anything that's made me scared yet as it's just been so damn predictable so far. His lackadaisical sauntering out of the car while there's rampaging axe twats around has had me bellowing at the screen in frustration at times. Plus Alan's constant mouth breathing in the cut scenes. He's always got his flappy gob wide open.

shoesonwrong
Dimrill wrote:
Is Gamefly a postal rental service? If so, yeah there are a few around. Lovefilm being the first that pops into my lobes.

Yup. Forgot to mention that bit. I just wasn't sure what you guys have over there and didn't want to assume it's the same as what's in the US (granted, some of the services I use in the US aren't even available to everyone here, what with Alaska and Hawii being so disconnected) or that everyone would know what I was talking about. I suppose elaborating would have really been key there, though.

TheAlbin0Kid
Please stop with the spoilers people! Now I will not be amazed and astounded by Alan's flappy gob and lacksadaisical sauntering!

Although I already have one criticism of the game without even putting it in the drive, namely that there is a picture on the back of the box which seems to depict Alan deep in conversation with Norris from Coronation Street

Trousers
I started it a couple of days ago and while it's quite atmospheric it fails to actually scare me most of the time due to the massive telegraphing of the appearance of evilbaddarkpeoples.

Oooh look ammo, oh look it's gone a bit foggy, oh look everything has slowed down and it has showed me where the fucking shadowblobbies are. You feel no fear of exploring some areas because you categorically know there's nothing bad going to happen. I'm hoping it changes later on but so far so obvious.

My hoarding mentality is meaning I'm hardly boosting the flashlight to conserve batteries even though everything gets fucking reset when you switch levels. I can't actually help myself.

devilman
Hmm.. I got this the other day (someone wanted to swap for Jericho.. fine with me) but I've not bothered playing it yet. Dimrill's not exactly making me want to either.

zaphod79
I started this the other night as well , only 2 chapters in , and its 'okay' - nothing special.

Dimrill
On hearing your wife scream your name in terror, would you:

a) Run immediately to the house
b) Quickly, without hesitation sprint to the cabin
c) Delaying no longer, return, with pace, to the cottage.
d) Look up from the railing you were leaning on and say "Alice?", turn slowly to the cabin you were staying in to hear more screaming, look at it thickly with your flappy gob open and say "Alice?!", hear more screams imploring you for help, say "Alice!" one more time before jogging towards the house?

TheAlbin0Kid
I'd start singing "Alice What's The Matter?" in a Terrorvision sty-lee and playing the rockingest air guitar ever until the crisis had passed.

Malabelm
I enjoyed it. The story was shocking, but the gameplay was fairly solid, and I liked that it wasn't perpetually dark. I played it right to the end, which is rare for me.

Dimrill
Oh look, a scenic hotel with a nice view. An OVERLOOKing view, if you will. And it's got a hedge maze.

myp
Come on, this is from the team that brought you Max Payne. You weren't expecting hackneyed plot devices and cheesy dialogue?

Dimrill
Just finished episode 4 and can now deduce the final moments of the game.

"Alice cried as Alan lay crushed under the book case. The giant darkness laughed 'Ha ha ha!' Then, for no reason, he left Bright Falls, never to return. The end."
There. Now he's trapped in a book I wrote. A crummy world of plot holes and spelling errors.
Chief Giant Darkness: The big darkness am winning! I am the greetest! Mwa-ha-ha-ha! I must now leave Bright Falls for no raisin!

Dimrill
Oh, and the bit with the stage at the farm is probably one of the most out of place and cringe worthy bags of fucking shit I've ever seen or played in a game. And I've played Two Worlds.

Hi! I told you I'd make an appearance eventually.

Another thing that bugs me about Alan Wake (and a few other games, none of which come to mind right now because I just woke up) is the collectible bits. This isn't a sandbox game or an RPG, where you wander around and do stuff at your own pace (even then, when you're not leveling up or really improving your character, it sort of feels like, "Really, John Marston? You want to get back to your family real bad and it's all you ever talk about? Well by all means, pick some more goddamn red sage."), it's pretty tightly constructed, linear game. Alan won't stop yappity yapping about Alice (and every time her says her name in a panic, all I hear is MIchael from Lost screaming, "WAAAAAAAAALT!"), but he keeps dawdling. To pick up thermoses. Thermoses.

Additionally, when he says stuff like, "The body had vanished, leaving nothing but a lifetime of nightmares behind." My teeth spontaneously fall out because it's that bad and even they want to get away from it.

And Gaywood is in on it too! Unless Gaywood is just a Dimrill sock puppet too...

He's about the right size for it.

Dimrill
I've never once created a sock puppet online. Since the early-mid nineties I've been Dimrill and Dimrill I shall always be.

But yeah. Thermoses of coffee. Coffee and cherry pie. DUCKS! On the Lake! And it's Alice because Det. Cooper's Annie was taken into the Black Lodge at the end of season 2.
"Where's Alice?"
\ 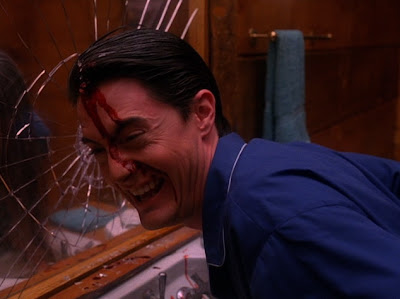 TheAlbin0Kid
Dimrill wrote:
I've never once created a sock puppet online.
Ah, but that doesn't mean you haven't done it TWICE, does it now? Ahhhhhhhhhhhhhhhhhh!

Edit: added "anywhere" for Flid.
Yeah, cos that one word is totally going to stop me being a dick about it if I choose to

Dimrill
*shines torch* GET BACK!

shoesonwrong
I'm not real? This changes everything. Namely, I don't think I should have to repay my student loans.

Dimrill
*huffy voiced retard*
"The light stabbed at my eyes. I needed painkillers and my sunglasses. *swallows painkiller* IMMEDIATELY: The pills worked fast."

TheAlbin0Kid
You sure are playing it a lot considering all your moaning...

Trousers
TheAlbin0Kid wrote:
You sure are playing it a lot considering all your moaning...

It does my tits in with its up its own arse-itus but I guarantee I will finish it because the fundamental luigi's mansion/shooty action is enough for me.

Dimrill managed to finish Prototype so his tolerance for crusty smeg in videogame form is far in advance of mine.

Malabelm
Trousers wrote:
Dimrill managed to finish Prototype so his tolerance for crusty smeg in videogame form is far in advance of mine.

Did you actually enjoy it, though?

Dimrill
The story? No. It was the biggest gush of arse gravy since tubgirl. The game-world? Not really. It's just linear paths through telegraphed contrivances.

Doctor Glyndwr
So why did you finish it?

It was indeed, but I'm fed up of every game striving to be open-world. Sometimes I just want to be led through an experience the developers had complete control over. Alan Wake filled this perfectly for me.